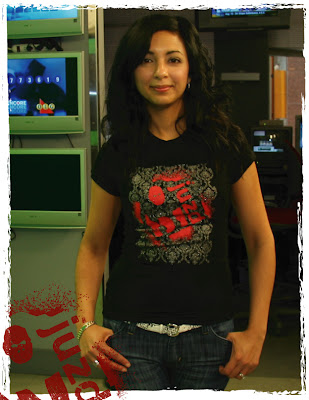 I met with Nalini Sharma the weathergirl for CityTV (CityNews) yesterday. Just in February she was hounoured with the Anokhi Magazine’s Most Successful TV Personality in Toronto award. But she have also won many not so formal awards such as the News Hottie of the Week award, she won this twice within 6 months!

A friend of mine who works at CityTV showed her the JUZD designs and she loved it. So I came by CityTv building to give her a shirt. Nalini loves it so much she wants to wear it on air! So keep on watching CityTv weather.

Video of Nalini Sharma – the Weatherbabe

Spotted: Melanie Martin of Flow 93.5 Rocks the Airwaves with JUZD