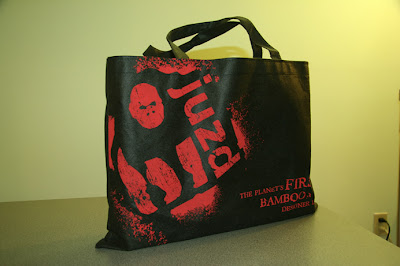 The JUZD team was at its first tradeshow, Green Living Show at the Toronto Exhibition place. And people there went crazy for the JUZD bag. People were dropping by ever so often saying â€œHereâ€™s the booth with that bag.â€ They apparently saw other people carrying it around.

I was thinking, no way, everyone is giving away free eco-friendly bags, no way people will pay $2 for this.

The bags were supposed to be free with a purchase of a shirt. But some people were so fixed on getting a bag they didnâ€™t want to hear about the shirts. I turned away many people before I realize I can make money from this. So we started charging $2 for the bags. I was thinking, no way, everyone is giving away free eco-friendly bags, no way people will pay $2 for this. But pretty much everyone that asked bought one. And we sold a lot of shirts too.

People were grabbing these shirts from left and right…

These types of tradeshows are littered with cheap clothing and big discounted shirts. I wasnâ€™t expecting to compete and sell shirts. It was more for awareness and exposure purposes. But to my surprise people were picking up the shirts. What I found out was that people actually cared about the quality and efforts put into the shirts. People were grabbing these shirts from left and right, lots of other exhibitors were getting it, parents and aunts were getting it for their kids, and of course the fashion forward wanted to pimp it themselves. At the end we sold over 20 shirts, which was a big surprise.

â€œpeople want to pay for art, the bag is an art pieceâ€

But the biggest surprise has to be all the people wanting to â€˜buyâ€™ a bag and buy other memorabilia. The bags were supposed to be a promotional item. People were paying to have my bag and promote the JUZD brand. But as I was told by a photographer â€œpeople want to pay for art, the bag is an art pieceâ€ she said. Then she asked if she can buy one of the signs to have it as the main entrance piece at her studio.