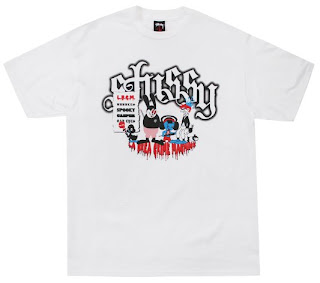 Streetwear, as observed by Stephen Vogel in his aptly titled book Streetwear, defies definition since, as a by product of street culture, it exists in a state of constant evolution. He goes on to contend that anything which draws its roots from street culture shall be considered streetwear. This assertion muddies the waters somewhat in the sense that there are many lines out there which do indeed have roots in the street, however one would be hard pressed to consider them streetwear. Somewhere in their evolution these lines have managed to alienate the crowd that first paved their road to mainstream appeal. For this reason, I would like to outline certain characteristics that separate streetwear from what becomes considered mainstream fashion.

To begin with, the core of streetwear has always been, and likely will always be, the graphic tee. It is through this medium that one can truly see what sets street fashion apart from the generic looking tees of the mainstream. This is evident in the originality and creativity found in the graphics. Rather than simply branding the shirt, streetwear companies have blessed their products with clever phrases and /or images that bestow emotional appeal upon the shirt, distinctly absent from the larger brands.

A second characteristic, which was truer today than ten years ago due to the advent of the internet, is a degree of exclusivity. True streetwear is the domain of specialty boutiques and not found in the mall â€“ although I do recall buying a Stussy shirt in a mall in the early 90s. Stussy has since corrected this error and managed to become hugely successful while maintaining its legitimacy in the street. Traditionally streetwear has been reserved for those with their ear to the ground and by the time a once exclusive label reached the mainstream, those in the know had long since moved onto the next one. It is this concept of exclusivity which essentially disqualifies brands with street origins that are readily available in malls and places like Athletes World.

Finally, streetwear companies dare to tread where no others will and are continually pushing the boundaries of what some folk would consider â€œdecency.â€ This is evident even in the names of companies such as FUCT and Fucking Awesome. Not to mention graphics and sayings that express political opinions, social commentary and elements of a more risquÃ© nature. Essentially, streetwear companies aim to stay true to themselves by not compromising their values out of fear of upsetting the powers that be. It is this radical attitude that separates streetwear from the generic fashion designed for the masses.