Finding the spots for the first big JUZD photoshoot

The other day we went cruising around Toronto to check out a few potential locations for our big photo shoot. I decided to work with one of Torontoâ€™s top fashion photographers , Igor Yu. It feels like Iâ€™ve seen portfolios of every single photographer in Toronto, but I instantly fell in love with his work.

Weâ€™ve done a shoot before and it was the idea of my then Marketing Director and good friend Amy Lan to do another. She was a publisher for a couple of magazines so I left it in her hands but with her gone and the stage we are in – a high fidelity vision of JUZD -the creative was in my hands.

The great thing about Igor is that he has a lot of experience. I really donâ€™t know what to expect or what the exact vision is. I called up my sexy friend Deniz Reno and we went cruising around town. We met at 8pm but we have to burn quite a bit of time before any shots because it was still bright outside. 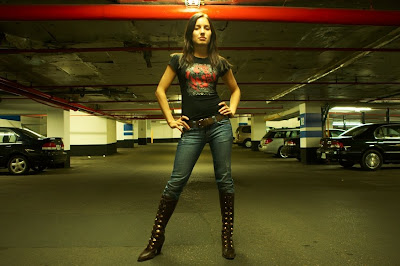 Our first stop is a parkade in Chinatown. This photo has a very nice dramatic feel to it. Igor wanted a greenish glow in the background. He wanted a longer lot for a more dramatic feel. I really didnâ€™t know what to expect. The only thought that came to my mind is that the picture looks good and Deniz has nice legs.

Then we went to this part of town where all the â€˜famousâ€™ walls of nice graffiti are. Not really a big fan of graffiti. Itâ€™s too ghetto and clichÃ©’ish. â€œBut they are really niceâ€ says Deniz and Igor. We drove by it. It looked good but Iâ€™m still not a fan. Plus the look of the place would be too typical. So I suggested making it kind of surreal by bringing a really high end couch to the place. Igor loves the idea no photos were taken and we kept driving. 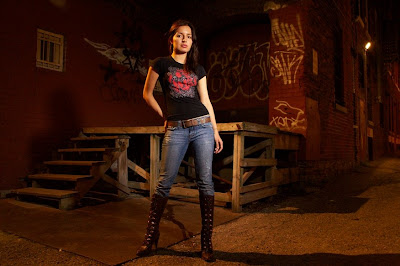 Next stop was an alley way I always go through and thought it was a very interesting spot. Photo above. Igor saw potential there. With the wooden platform you can make some interesting poses. It looks exotic and doesnâ€™t look like Toronto but it does look like the alley of any city.

Tried some street paparazzi style shoots but it didnâ€™t turn out well.

We stopped by for burritos which was, in retrospect, a bad idea. Deniz has been very sick from it for a few days now. I hope she gets well soon. 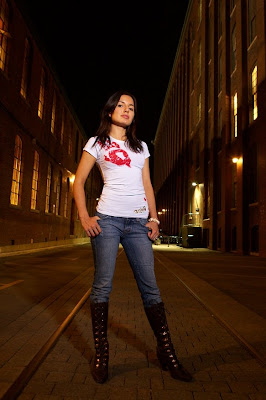 We returned to a spot that we drove by earlier, now it was dark enough for what we wanted to do. It was in the back alley of some stores. I really liked this because of the strong classic architecture. The vertical lines made it very dramatic and powerful. Iâ€™m beginning to realize the creative vision I wanted for JUZD photos. 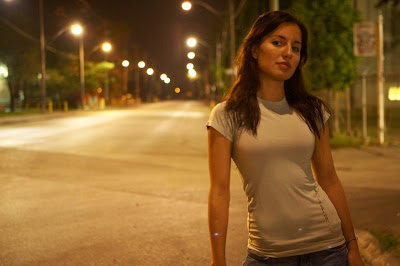 Then we went back to the area where we initially met and I left my car. This is kind of an American Apparel style photo with the natural lighting, no make up, just pure rawness of the street. I wasnâ€™t a big fan of this but it started to grow on me.

At the end of the day there were two spots I really liked and I thought they were the perfect locations. It was a great experience because now I know the creative direction I want to go with JUZD photoshoots. Igor was amazing with his perspective of the options and his creative vision. To find out the location and theme, stay tuned…

Celebrities with Signature Style of 2015