Dom Rebel – one of the hottest up and coming labels 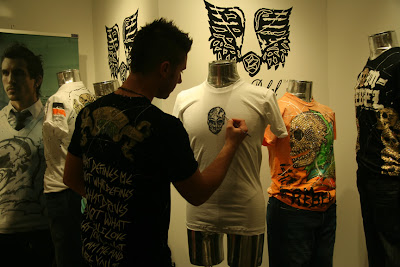 I finally got a chance to meet the founders of one of labels I really admire. If you know anything about street culture in Canada you know Dom Rebel. These guys are the talk on the streets. Justin Svatina the Lead Designer for Dom Rebel of Montreal is a pure artist.

Dom Rebel’s success is different from the other brands who seem to make it because they copy what’s hot or have a celebrity friend put on the shirt. Dom Rebel’s success is based on artistic talent. In talking with Justin he’s in his own world not too concern about what’s out there or what others are doing. That is the true epiphany of a great artist that sets the trends not follow it.

Justin said he draws skulls just because he likes it. His skulls are not mad or angry like others. It’s just is. His skulls are poetic. It’s not a copy of the typical angry skull that you find on many (too many) shirts.

One thing you will also notice with the Dom Rebel collection is that all the shirts are consistent. One of the reason I started JUZD was that it is common for a collection to consist of different styles different designs with no coherent theme. The philosophy of clothing labels seems to be make as many designs as cheaply as you can and hope the consumers will bite on a few. Dom Rebel even goes a step further.

Each season is a different theme and different concept says Justin. And the designs are different for each season. He does not reuse any designs so once the season’s over you can’t get that shirt anymore. This season is “Fire in the Disco”, it is like the Devil’s playground says Justin. You will notice that the colours of the shirts are bright and fruity, contrast with the rebellious and aggressive designs, creates a very unique feel to the shirts.

The reason that Dom Rebel is so hot and why they would stay hot is that it’s truly about the art. Justin is a pure artist. In following Dom Rebel for over a year now and personally going through the same path as Justin I am very impressed at the amount of artistry in his designs especially being freshly introduced to silk screening only in 2003. 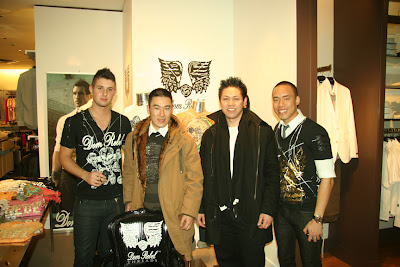 Some of the shirts take 5 to 8 hours of labor (of love) to make. Yes! That’s on just one shirt. Even Don Nguyen, marketing and sales said he still sees it as doing something they love.

Each shirt is truly a piece of art. That’s why this label is on fire with stores carrying it all over the world. Check out the Dom Rebel Collection.